Set during the 1982 invasion of Lebanon, CUP FINAL tells the story of Cohen, a young Israeli soldier who is kidnapped by a group of Palestinian fighters and held hostage during the conflict. The 1982 FIFA World Cup happens to be on during the invasion, and captor and captive’s mutual love of football (and support for the Italian team), helps break down the barriers of nationalism and historical baggage. 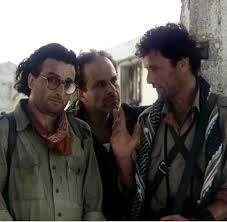 A Film by: Eran Riklis

Cohen, a soldier in the Israeli army, is thrilled to have tickets soccer’s greatest event – the world Cup Final – but when Israel invades Lebanon, he’s forced to stay on military duty in the desert. And if that’s not bad enough, some Palestine Liberation Organization soldiers on their way back to Beirut take him prisoner.

Then the PLO leader turns out to be a fan of Cohen’s favorite team! Ironically, the two enemies are stuck in the middle of a war in the Middle East, when they’d both rather be at the championship supporting the same players.