A satirical Israeli comedy about three very different brothers trying to get around many obstacles to bury their grandmother on her kibbutz. Since winning the Israeli Academy Award in 1999, "Operation Grandma" has become one of Israel's biggest cult films. 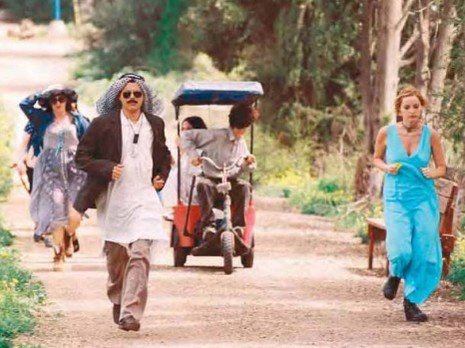 Mivtza Savta ("Operation Grandma") is a satirical comedy about the Israeli military and about kibbutz life. The story revolves around three brothers: Alon (34), a no-nonsense army officer; Benny (30), a brilliant electrician; and Idan (22) a wimpy tour guide. The story is told from Idan's point of view.

The three brothers want to bury their beloved grandmother in the kibbutz cemetery. Because Alon has    a secret security operation set for that same day, they have to work on a tight schedule so he plans the burial like a military operation - hence the title. A series of mistakes and mishaps complicate things with hilarious results.